Coastal environment at the centre of the dialogue between sciences and decision makers in Comoros, Launch of the DIDEM project by the President of the Republic

On 12 August, the President of the Republic of the Comoros, the Governor of Anjouan and the Minister of Environment of the Comoros launched in Anjouan the DIDEM project site in Comoros in the presence of a large assembly including almost the entire Government of the Union and the Executive of the Autonomous Island of Anjouan, the Speaker of the National Assembly and the deputies, the Governors and mayors, the representatives of the Governorate of Mohéli, the National Network of Protected Areas, NGOs, associations and the House of Civil Society Organizations (MOSC). 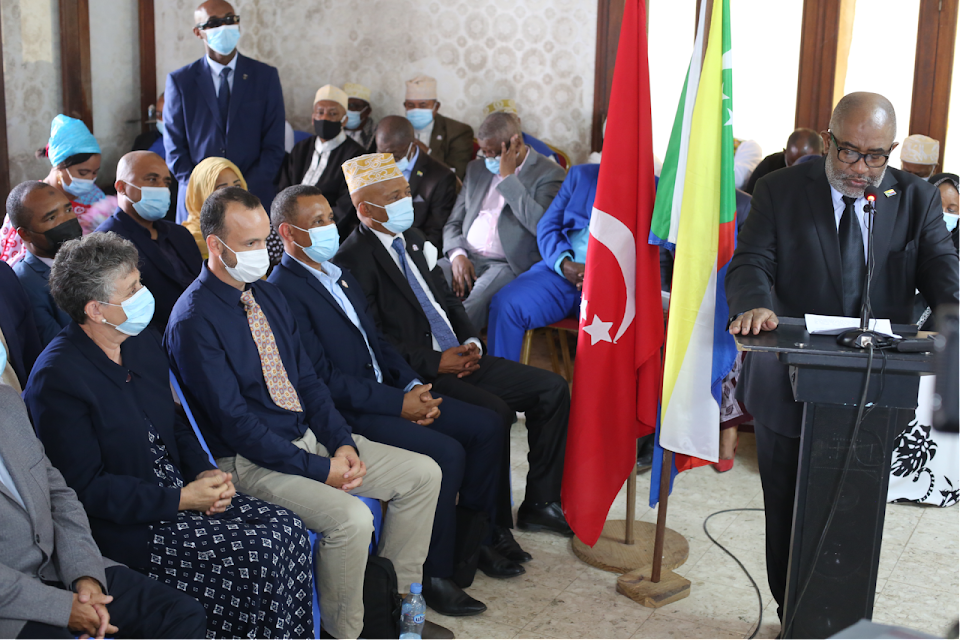 The official launch of the DIDEM project in the Comoros was held on August 12 at Dar-Nadjah, palace of the Governorate of Anjouan, with a keynote speech by the President of the Republic and the Governor of Anjouan on the contribution of science in the management of the environment within the framework of the Emerging Comoros Plan, the national version of the SDGs.

As emphasized by President AZALI Asosumani: “The coastal and marine environments as well as the coastal zones constitute an important source of wealth for our countries in the Indian Ocean, especially in the fisheries and tourism sectors ..... The time has come to train, raise awareness but also and above all, to identify the actions to be implemented to protect and conserve biodiversity through, among others, the promotion of natural systems, which will make the country more resilient to natural disasters and environmental threats.”

How can we improve the use of environmental research results by decision-makers in the South? This is the problem that the DIDEM project (Dialogue between science and decision-makers for integrated management of marine and coastal environments) seeks to address, which in Comoros is summarized by the acronym TTRAMP*.

The DIDEM project in Comoros focuses on two workshop zones: the Mohéli National Park and the Shisiwani National Park (Anjouan). Three priority themes will be developed: the implementation of an observatory of coastal vulnerability to marine erosion, the management of macro-waste and ecological engineering for the restoration of the reef ecosystem.

*T : transfer to decision-makers simple and inexpensive methods developed by the IRD in other parts of the world so that these decision-makers can own them and apply them “in the long term” to monitor their coastal environment and the effectiveness of the management measures they have taken to preserve this environment and the ecological services it generates. This will also facilitate the social acceptance of management measures. Four methods will be transferred: participatory monitoring of coastline erosion, collection of environmental user perceptions, territorial foresight, and legal education.

*T : train coastal actors, especially the staff of the Comoros National Parks, on use of these methods.

tain students by supporting their Masters in Environmental Studies of the University of the Comoros in Anjouan and to organizing two regional summer schools..

*R : raise awareness among the younger generation on importance of science through organization of various activities in schools and by co-organizing with the Governorate of Anjouan a science festival.

Raise awareness on environmental management among the younger generation by implementing an educational marine protected area in Mohéli.

*AMP : Assistance in project development, particularly in the areas of ecological restoration and macro-waste management, so that Comoros' environmental decision-makers can better access international funding from AFD, UNDP and UNEP, targeted at the Indian Ocean region.

Azali Assoumani, President of the Republic of the Comoros@DineCombo

Launch of DiDEM in Anjouan, Comoros@DineCombo

The DIDEM team, launch of DiDEM in Anjouan, Comoros@DineCombo

The launching ceremony of the DIDEM project in the Comoros received wide national media coverage and in the islands of Anjouan and Mohéli. DIDEM enjoys an extremely voluntarist support from the two governors which shows that decision-makers are strongly in favor of better integrating research results into their public policies as soon as these results are accessible to them and presented in a didactic form.