The poster of the MARECO educational kit represents a coral reef of the Indian Ocean and its inhabitants. It allows to approach the notion of marine biodiversity and to work on the name of each animal in French, in English or in the different creoles of the Indian Ocean.

To go further, we also use it to explain to children the usefulness of an international and universal scientific nomenclature, understandable and readable by the whole world, because common names vary between languages!

Poster and (or) case: two precious educational tools to be used without delay to better understand the world of the reef and its inhabitants! 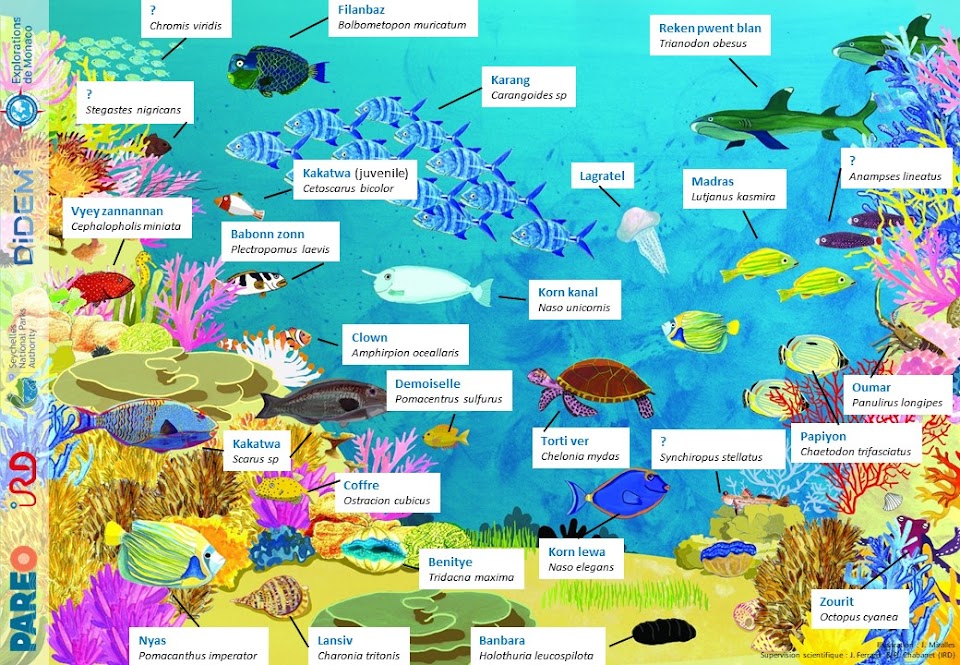 The poster of the MARECO case completed with the names of the reef inhabitants in Seychellois Creole (in blue) and their scientific names (in italics).

To promote the linguistic heritage associated with the coral reefs of the Indian Ocean, the PAREO project team "Indian Ocean Reef Heritage in our hands", component C of the DIDEM project, has produced three new versions of the poster according to the sites concerned:

A big thank you to the volunteer translators who participated in this work! These versions are in addition to the existing ones in Reunionese Creole, French and English.

The MARECO poster and its different versions are freely available on the website: http://pareo.re/ressources-peda/

This poster originally came from a MARECO educational kit created by the IRD and made up of three materials: an album, a 7-family game and a role-playing game to discover the biodiversity of coral reefs and understand the importance of protecting them together, which can be found at https://www.ird.fr/ressources-pedagogiques.

I download the MARECO Posters
Know more about PAREO within DiDEM