The participatory observatory of coastal vulnerability to marine erosion in the Comoros: status of activities

Coastal erosion is one of the major challenges facing the Comoros. In order to anticipate the consequences, the DiDEM project deploys methods, tools and trainings and supports Comorian partners to set up a coastal erosion monitoring mechanism in a participatory observatory approach. In this article, the project reports on the progress of its activities from its launch in August 2021 until March 2022. 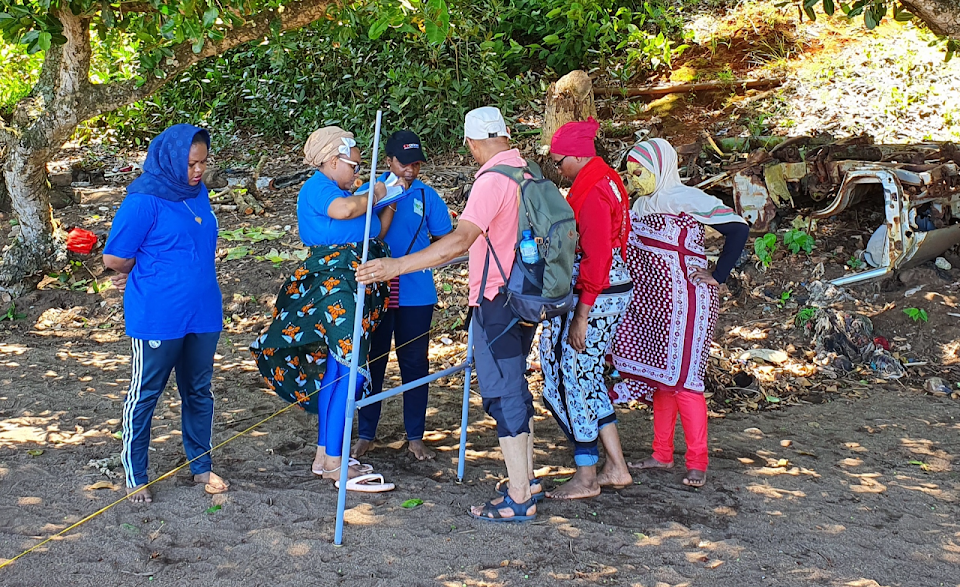 In August 2021, the DiDEM project, in collaboration with the Chissiwani and Moheli national parks, selected seven pilot sites for marine erosion monitoring. In March 2022, five new sites were added to the observatory, which currently totals 12. The eight sites are located in the southern part of the Moheli National Park: Nioumachoi, Fironi Dzia lagnouma and Dzia lagnouma, Bangacharini, Sambia, Sambajou, Miremani and wenefou. The other three are within the Chissiwani National Park on the Sima Peninsula in northwest Anjouan: Mafumbuni, Bimbini and Mtsangani Sima. The twelfth site is Al-amal Chitsangani, which is located in the bay of Mutsamudu in the north of Anjouan. All these sites are subject to coastal erosion monitoring. 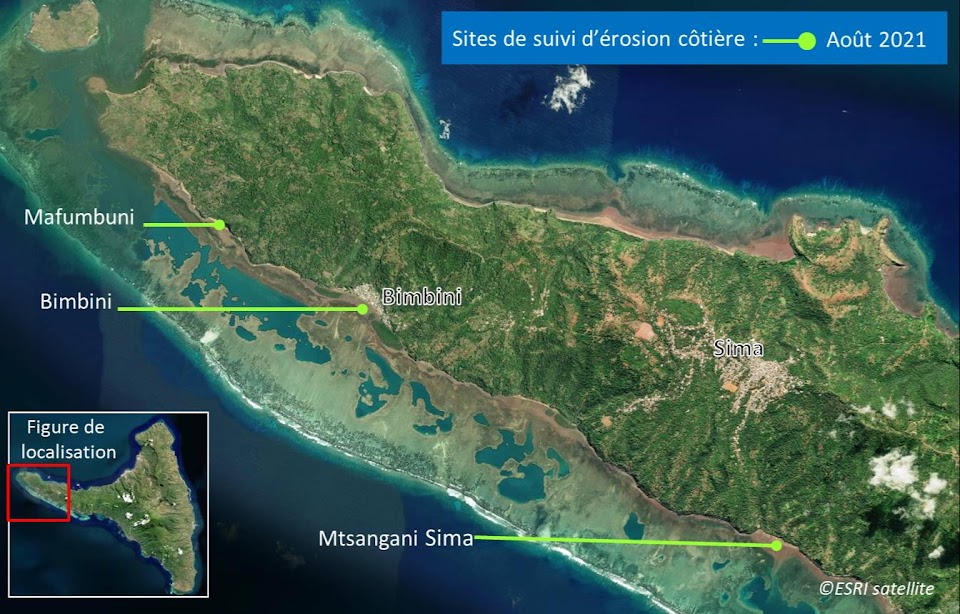 From benchmarks to beach profile measurements

To monitor coastal erosion, the 12 observatory sites are covered by a network of 32 reference posts, 22 in Moheli and 10 in Anjouan. Placed on the backshore, these markers constitute zero points from which the profile surveys and morphological monitoring of the beaches and the coastline are and will be carried out using a topometer. Thus, 44 topometer surveys, including 31 in Moheli and 13 in Anjouan, were carried out in August 2021, February and March 2022. The next surveys will be carried out in the same months (August 2022, February and March 2023) to ensure comparability of the data acquired.

From assessment to prioritisation of erosion landscapes

In addition to the quantitative data from the topometer measurements of beach profiles, DiDEM has deployed a second approach that takes into account the qualitative dimension of erosion landscapes. The aim was to characterise the observatory sites, identify coastal erosion indicators, assess the degree of exposure and vulnerability of the issues and estimate the level of erosion. Based on landscape observations, this approach was implemented in March 2022 in six of the twelve observatory sites: Nioumachoi, Fironi Dzia lagnouma and Dzia lagnouma, Bangacharini for Moheli and Mtsangani Sima and Al-amal Chitsangani for Anjouan. Based on the information collected and processed, these sites were prioritised and ranked in terms of erosive risk and intensity. Of the six sites assessed, the southern compartment of Bangacharini beach, which backs onto the cliff, was found to have reached a very severe level of erosion. In second place, Nioumachoi beach has a severe level of erosion.

Knowledge transfer as the spearhead of the observatory

The training provided by DiDEM to the eco-guards of the Moheli and Chissiwan national parks since August 2021 and the acquisition of methods by them have been the linchpin of the success of the observatory's activities. These trainings were then extended to the agents of the environment department in Anjouan and to the teachers of the University Centre of Patsy during the third DiDEM mission to the Comoros from February to the end of March 2022. As a result, the number of trained partners has increased from 19 to 32, 75% of which are from the national parks. The equipment for measuring beach profiles and coastlines with tutorials were made available to them for monitoring. 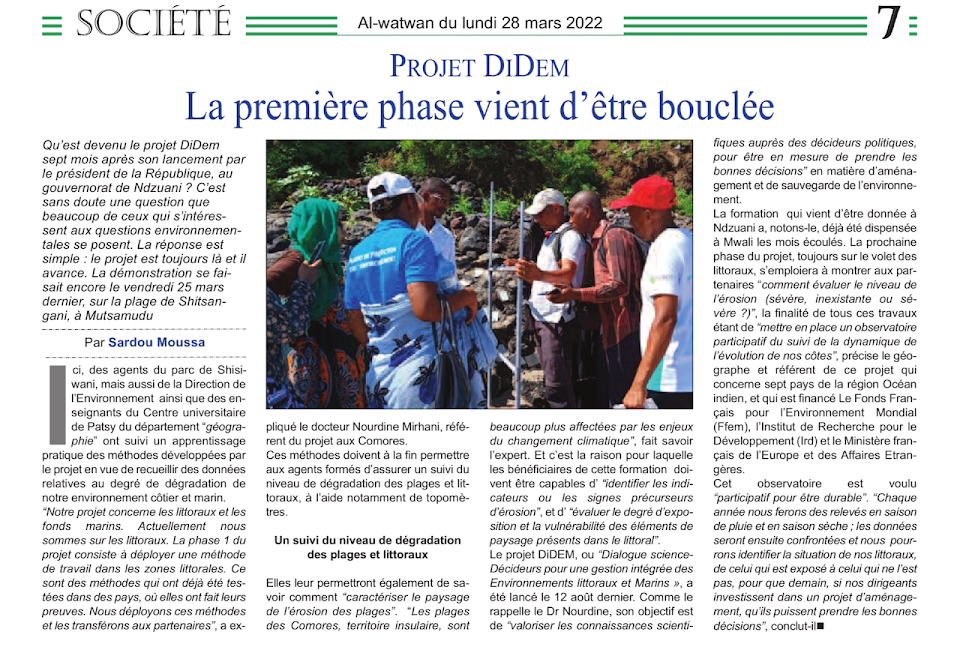 From August 2021 to March 2022, DiDEM records an increase in the number of observatory sites and partners trained to monitor coastal erosion. This number will increase further as agents from the national parks and the environment department have expressed their willingness to extend the observatory area.

As for the teachers of the University Centre of Patsy, they will train and supervise the students; this will contribute to the popularisation and perpetuation of knowledge on the processes and methods of coastal erosion monitoring.